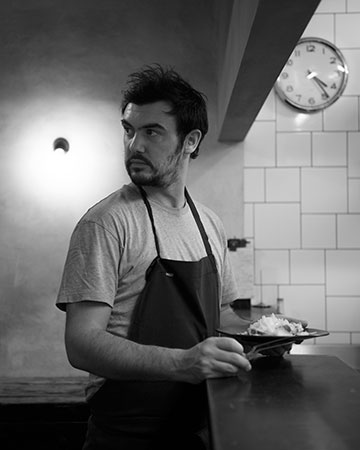 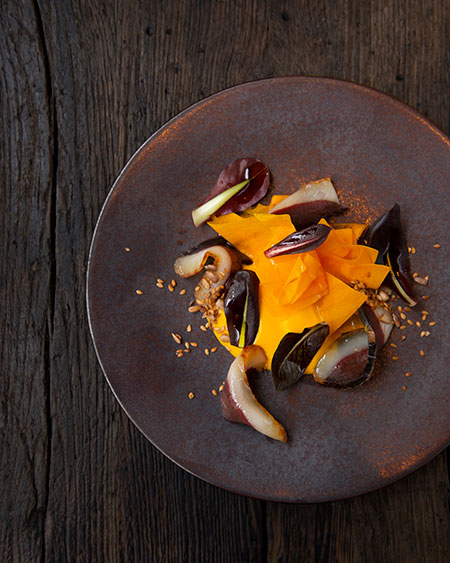 Truly, madly, deeply Parisian darling Bertrand Grébaut is the ultimate homeboy. Don’t tell him though : he thinks he settled down for good, and claims to have turned his back to his teenage years, spent with his daredevil street art posse. Since the opening of Septime on rue de Charonne, he has become the king of East-Bastille, the trendsetter of a new approach to (fine) dining. Long gone are the days of stiff haute cuisine, but also long gone are the clichés of the bro-minded bistro scene. Thanks to his minimalistic approach and his green fingers, and also because he knows how to achieve the right balance between rough cuts (don’t tell the neighbours, but he loves, like all of us, horse heart à la plancha) and delicate touches, he reaches for an extremely bearable lightness of being which is still unrivalled in France.

Everybody adoooores Septime ! Even the guide Michelin! Because it’s just the right place to be. Humble yet bold, complete with a powerful vision and a strict agenda : cook the way you feel and the way you are, straightforward and evasive, always seductive, with an almost feminine sensibility. That’s the secret of Bertrand Grébaut, the knack no one will ever take away from him : inventing and delivering courses that bear no grudges on a daily basis. Joyous and uplifting creations, clear and sharp like a morning light. What he cooks is much more than the result of recipes : his dishes work like Polaroids of a certain state of mind – and a strong mind, that is. « French cuisine became too hip and forgot a huge part of its heritage and history. That’s why I’m also exploring the past of cuisine and then search for the right ways to update old techniques ». That’s why he’s so obsessed with sauce- making, a very traditional French knowledge that he wants to be a major part of 21st century dining. Bertrand Grébaut is never where you’d expect him to be. That’s why he’ll always be our favourite badass.