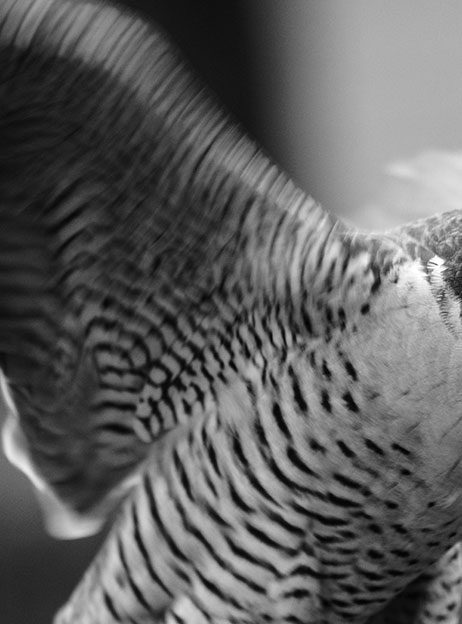 The British perfumer James Heeley is an autodidact, who discovered the world of fragrance via the natural inspirations that continue to feed his career in design after studies in philosophy and aesthetics at London’s kings College. As one of Europe’s only independent luxury perfumers working today, James bridges both disci- plines from his Paris office, as he extends his world in all directions through experi- ential olfactory projects, artworks and tire- less fragrance experimentation with pure, quintessential ingredients.

Acknowledging the significance of perfume in the spiritual and historical traditions of both East and West, from Neolithic Chinese art to the embalming practices of Egypt, Heeley’s “garuda” pomander is a unique objet d’art that aligns Buddhist animal mythologies with the world of fine fragrance. The regal form of a Peregrine falcon, itself a superb specimen of British taxidermy, is sat atop a scented ceramic pomander to represent the mythical garuda (half man, half bird), its clawed feet and beak embellished with gold leaf. Below, the pomander is scented with Heeley’s newest fragrance Phoenicia, rich with notes of incense, dry raisins and “oud”, to become a new age talisman evoking the ethereal dialogue between heaven and earth.